Muntinlupa recognizes I CAN SERVE

I CAN SERVE Foundation was recognized as one of Muntinlupa City’s “Key Development Partners” at the 23rd Anniversary of the Cityhood of Muntinlupa on March 1. I CAN SERVE received a Plaque of Recognition from the city.

Muntinlupa began its partnership with I CAN SERVE in 2014 through Ating Dibdibin, the foundation’s community-based breast cancer screening program. The city has since trained all its barangay health workers on clinical breast examination, which is recommended to be done annually on women beginning the age of 30. Muntinlupa has also enlisted patient navigators to help women complete any recommended follow up and if necessary, treatment. 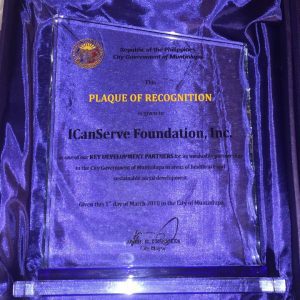