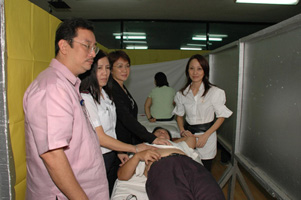 ICanServe has partnered with Marikina City, through Mayor Marides Fernando, for its flagship program, “Ating Dibdibin,”  the first community based  breast cancer screening program in the country.

Launched on June 6, Ating Dibdibin’s first salvo was made possible via a Memorandum of Agreement (MoA) signed between Mayor Fernando and the ICanServe Foundation represented by its founding president, Kara Magsanoc-Alikpala.

To prepare for the program, ICanServe with the help of Dr. Corazon Ngelangel, oncologist, cancer screening advocate, trained the medical staff, barangay and family health workers on early breast cancer detection techniques so they could teach the female residents of Marikina. During training, each participant also received free clinical breast exam.

Catering to women aged 20 to 75, the program aims to reach about 54,000  through barangay assemblies and various venues such as schools, private hospitals, sociocivic organizations, and homeowner associations.

Ating Dibdibin aims to fight ignorance and the fear women have of cancer, in order to make breast self exam a lifetime habit. It ultimately wants women to take charge of their health. Hopefully at the end of many years, breast cancer will be caught in its earlier stages.

Under the MOA, both Marikina and ICanServe have committed to help source funds for women who will test positive for breast cancer.

Ating Dibdibin is a program under the auspices of the American Cancer Society made possible by a grant from Pfizer Foundation USA and Pfizer Philippines.

ICanServe is paving the way for an agreement between Marikina City’s Diagnostic & Specialty Center and Amang Rodriguez to join forces to help women diagnosed with breast cancer. Biopsy and surgery may be provided by Amang Rodriguez, while Marikina’s Diagnostic &Specialty Center can put together a kit which contains paraphernalia for surgery & biopsy – to be given free.

On June 6, all day screening was offered to all female employees of Marikina City Hall after the formal launch of Ating Dibdibin. Clinical breast examination was conducted by the city’s 16 medical staff doctors and nurses.