Cebu City broke the Guinness Record for the largest Zumba class on October 18, 2014 with 8,232 participants engaging in 30 minutes of non-stop basic Zumba. It overtook a two-year world record set in India by 6,671 Zumba participants.

The city failed to break the record for the largest human pink ribbon formation with 6,671 participants, a couple of hundred short of India’s 6,847 participants.

According to a report published in The FREEMAN, a member of the Philippine STAR Media Group, “the pink formation record attempt fell short because many who went for both attempts did not know they had to wear a pink shirt and a pink headscarf to join the pink ribbon attempt.” The report was written by Caecent No-ot Magsumbol.

The attempt to break two world records in one day brought the entire city together with the local government, business and civic groups like Rotary Cebu Fuente, and non-government organizations lending a hand. 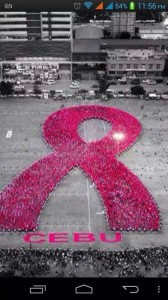