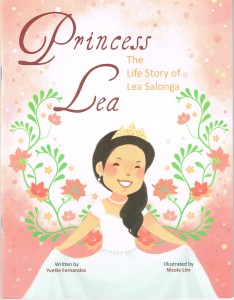 Published by Dream Big Books and written by Town&Country editor-in-chief Yvette Fernandez, Princess Lea is a children’s book that tells about the highlights of Salonga’s career, which began at the age of six when she auditioned for a role in The King and I.

Illustrated by Nicole Lim, a member of Ang Ilustrador ng Kabataan, the 24-page story book is part of a collection of inspiring stories that aim to kindle in children a desire to “aim for the sky, do their best, and meet the challenge of helping change the world…for the better.”

The book was launched on Sunday, November 17, at the National Bookstore branch in Glorietta 1. Salonga’s daughter Nicole read  a good two pages from the book in a program hosted by Issa Litton. Also in attendance was Salonga’s mother, Ligaya.